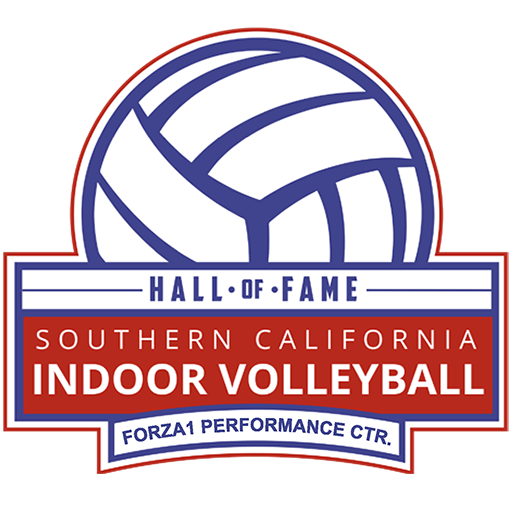 The Southern California Indoor Volleyball Hall of Fame (SCIVBHOF) was founded in summer of 2016 at American Sports Centers in Anaheim as a 501c3 charity non-profit organization (#81-3695316) to raise awareness for the indoor sport from San Diego to Santa Barbara.  The SCIVBHOF moved in January,
2021 to the Forza1 Performance Center in Temecula-Winchester.

Heading the 2023 SCIVBHOF list are 2008 Olympic Gold Medalist winning Libero Rich Lambourne and numerous-time Golden West College championship women’s coach Albert Gasparian. Mary Perry, who played for both the first and second USA Olympic teams in 1964 and 1968, plus Ninja Jorgensen and Miki McFadden, who both played with Perry on the 1968 USA Olympic Team for Mexico City were also selected. High School and College Player of the Year and 1996 Olympian Kristin Klein Keefe and High School Player of the Year and 3-time Collegiate All-American Cynthia Barboza-Wilkes, both from Stanford, round-out the 2023 induction class. USC volleyball playing All-American and USA National Team sports physician and 2012 London Olympic Doctor, Bill Stetson, was selected for the 2023 Lifetime Service Award for almost 50 years in volleyball.

Lee, who led Long Beach State to the 2004 NCAA finals, won gold for the USA Olympic team at 2008 Beijing, and bronze at 2016 Rio before retiring from the program. He played at the Beach for SCIVBHOFer Alan Knipe and for SCIVBHOFer John Speraw on the USA team. He is still playing beach and won his first AVP event on July 24 in Atlantic City. Youngs was a rare four-time collegiate All-American at UCLA, and won the 1991 NCAA while playing in four straight Volley Fours, and on the 1996 Atlanta Olympic indoor team. After retiring indoors, she and won a bronze medal at Athens 2004 in Olympic beach with fellow SCIVBHOFer Holly McPeak.

Shaw, who was a multi-sport standout at Palisades High School before attending Loyola Marymount University for college and being an International Volleyball League (IVL) professional player, coached Stanford to its first four NCAA titles in the 1990s, and is the all-time women’s NCAA percentage coaching leader (440-70, .863).

McLaughlin was the first coach in NCAA history to win titles in both men’s (USC in 1990) and in women’s (Washington in 2005). He was also an All-American setter for UC Santa Barbara. Dannevick won six NCAA Division III titles as the head coach at UC San Diego and dominated in the 1980s and 1990s with 10 championship appearances in 12 years. Wegrich, who played at San Diego State and was an all-star defender in the IVL, finished her 43-year college coaching career in the top 15 among in all-time NCAA wins with 780, along with numerous NCAA appearances at Minnesota, Arizona and Cal Poly Pomona. Aldrich dominated high school girls’ volleyball, leading Mira Costa to many league, CIF and California State titles after playing at Long Beach State.

Alice Chambers Sanchez, who will turn 90-years old in March, 2023, has been selected as the 2022 winner of the Southern California Indoor Volleyball Hall of Fame (SCIVBHOF) Lifetime Service Award. Attending Narbonne High School in Lomita, she did not begin playing volleyball until the age of 25 in a house wives league after she was married with four children. She started organizing and running Southern California area tournaments back in 1960, and ran events for 59 years until stopping in 2019 at the age of 86. Her work and expertise included the scheduling for as many as 90 teams and officials over one event.

For 2023 Lambourne started every match for the 2008 gold medal winning team in Beijing and has a 1999 NCAA title as the BYU starting outside hitter after first playing at Foothill HS in Santa Ana. Gasparian won an incredible 92% of his women’s match at Golden West College, which included 16 California State titles (12 in a row), and a 105-match winning streak for the UCLA graduate.

Perry, who passed away in 2012, was a two-time AIAW All-American at Cal State Northridge after playing in 1964 and 1968. She is in the CSUN and Pierce JC Halls of Fame after starting playing in Burbank. Jorgensen, who is in the LA City HOF and went to Occidental College, also won gold at the 1967 Pan-American Games with Perry. She was the long-time coach at Glendale HS, starting before Title IX came into law, and passed away in 2017. McFadden was the youngest player at age 18 on the USA National Team beginning in 1966 and set for the 1968 Olympic squad before attending USC. She was a HS championship coach in Oregon.

Klein Keefe was a HS standout for Marymount and then a four-time All-American for 2022 HOF inductee Don Shaw at Stanford. She played on the 1996 Atlanta Olympic Team before retiring. Her twin daughters were part of three NCAA title teams at Stanford. Barboza-Wilkes was the Gatorade National Player of the Year at Long Beach Wilson HS, then led Stanford to three straight NCAA finals. She was twice an alternate for the USA Olympic Team.

Stetson, who has been of service to the volleyball community for almost 50 years, was a NCAA championship setter and multi-time All-American at USC. After completing USC Keck Medical School, he has been in sports medicine for the USA men’s and women’s programs since the 1990s, including traveling to the 2012 Olympics in London as team doctor. He was the first USC men’s volleyball player to ever win the NCAA Silver Anniversary Award in 2007 for his combination of sports and academics.

From 2016 through 2022, 80 all-time indoor volleyball greats have been inducted into the SCIVBHOF and seven more have been honored for their lifetime service to the sport.  The next induction event is scheduled for May of 2024.  Please email any HOF questions to SCIVBHOF@gmail.com 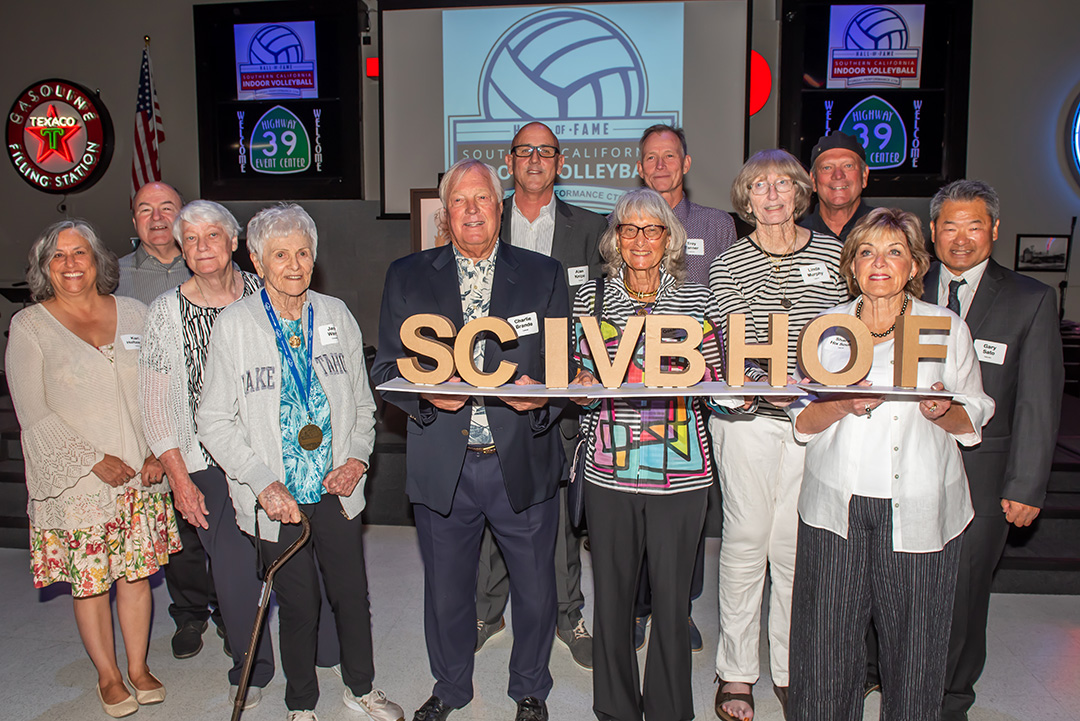 At event, but not in picture: Tammy Leibl, Ryan Millar, Reid Priddy.

Peterson, who is in the Cal State Long Beach Athletics Hall of Fame, was part of the first two USA Women’s Olympic teams in 1964 (teammate of Linda Murphy, who played at Cal State Northridge) and 1968. Davenport, who is in the Wesleyan University in Connecticut HOF for basketball, was a key member of the 1968 USA men’s Olympic team and went on to be the most recognized NCAA referee in history. Woodstra, who led USC to the 1977 AIAW title, would have started on the 1980 USA Olympic Team, which boycotted Moscow. She won a silver medal as captain of the 1984 team and was an assistant coach for the 2008 USA Olympic silver medal team in Beijing. Sturm, a top UCLA player on three NCAA title teams (1972, 1975, 1976) and the first Stanford men’s and women’s NCAA finals coach, went onto be the USA Olympic Coach in 1992 (bronze medal in Barcelona) and 1996.

Hovland, who led USC to the 1980 NCAA title, had a legendary beach career after retiring from the indoor game. Holtzman, who is part of the International Volleyball Hall of Fame, was also a beach legend and was regarded as one of the greatest all-around players in world history.

“We are very excited that our fifth Southern California Indoor Volleyball Hall of Fame induction class covers so much USA volleyball history and has such a great USA Olympic team presence,” said Mike Gallups, President of the SCIVBHOF. “We are very hopeful we can honor this group and the 2020 class by having a major induction event in the fall if our honorees have been able to obtain the vaccine for COVID-19 and the health situation has improved.” 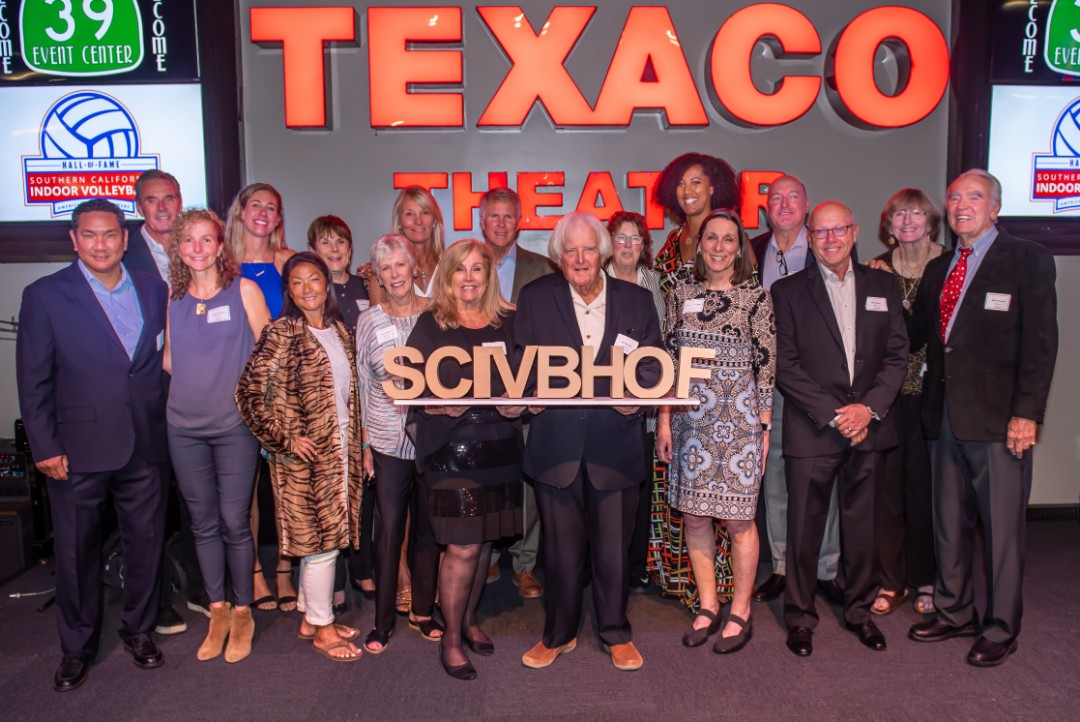 Find out who the 2023 Inductees for SCIVBHOF that have been selected for this years’ class.
Click Here

Download our Nomination Form and return it by September 1, 2023 Nomination for athletes to be considered for 2024 Awards.
Download