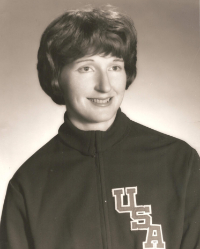 She was part of the first USA Women’s Olympic Team in 1964 and one of the most decorated local volleyball players in history. An 11-time USVBA All-American and eight-time national champion with the Shamrocks, Murphy competed many years internationally with the USA national team. Her highlights included the 6-3 middle blocker leading the 1963 USA Pan-American Games to the silver medal. She then played in Tokyo in 1964, and stayed with the USA program that won a silver medal at the 1967 World Championships and a gold medal at the 1967 Pan-American Games.

In 1971 she received the USA Volleyball “All-Time Great Player” award as one of the first 12 women selected for the national honor. She made the USA 75th Diamond All-Era Team for players from 1949-1977. She spent 40 years in coaching and was at Burroughs High School in Burbank from 1984-2002. She won two league titles and twice advanced to the CIF playoff quarter-finals. She played and coached at San Fernando Valley State (now CSUN) and was a three-sport athlete at LA Valley College and inducted in 2014 into their Athletics HOF. For her USA Volleyball work, she was awarded the James E. Coleman USA National Team Award. 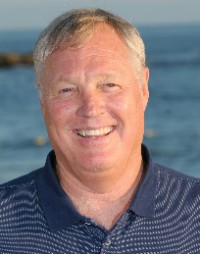 Charlie is both a coaching and club administrative legend for the Orange County girls’ and Balboa Bay Club boys’ volleyball teams. Brande has spent his 40-year plus coaching career primarily in Orange County, coaching both on the club and high school levels, including both Newport Harbor and Corona Del Mar. He also was successful as the head coach for both the UC Irvine men’s and women’s teams.

Numerous Brande players have received college scholarships and he has coached many Olympians and USA National Team members. Brande has been the administrator or coach for 35 club championships over the past 40 years. While the UCI head coach, he won both MPSF (men) and Big West (women) Coach of the Year honors. He coached at both Hawaii for Dave Shoji and UCLA for SCIVBHOF member Andy Banachowski in the early 1980s. Over 200 of the OC/Balboa Bay club’s male and female players have earned college volleyball team spots. He won two CIF boys and two CIF girls titles and one state title.

Sue was a former USA national team player and the Hall of Fame coach at UC Riverside where she won three national titles. Gozansky was a six-sport star at Cal Poly Pomona before finishing a master’s degree at UCLA around traveling with the USA team. She put UC Riverside on the map during her 39 years of volleyball coaching in the AIAW & early NCAA era, which included winning 674 matches. She led UCR to 20 straight playoff berths and was always a NCAA title contender from the 1970s to the 1990s in winning three titles (AIAW in 1977, NCAA in 1982, ‘83).

She was inducted into both the UC Riverside and Cal Poly Pomona Athletics Halls of Fame as well as the AVCA and Southern California Jewish Sports Halls of Fame. Gozansky, who in recent years was a volunteer volleyball assistant at Claremont High School, after retiring from college coaching, has coached the USA in numerous internationally competitions. She also coached in the Olympic Sports Festival. The author of two books, she also coached four times in the Maccabiah Games in Israel. She was inducted in 2016 into the Riverside County Sports Hall of Fame. 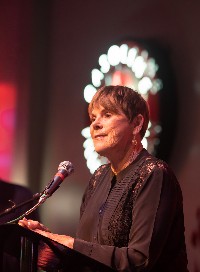 Ann is the long-time Regional Commissioner for the Southern California Volleyball Association (SCVA). She has been contributing to the sport for almost 50 years and is known by virtually every local club coach and director. For the past 30 years, Davenport has run the most powerful national organization for boys and girls club tournaments out of her office at American Sports Centers (ASC) in Anaheim. The SCVA is noted under her leadership for helping over 10,000 high school students to receive college volleyball scholarships through the work of the program.

Ann attended Narbonne High School while playing volleyball all the way through USA Master’s competitions. She competed in field hockey at Whittier College. She is the mother of three daughters. The SCVA Program Coordinator is her daughter Shannon. She and her sister Leiann received college volleyball scholarships at St. Mary’s College and UC Irvine respectively. The youngest daughter Lindsay went into tennis and won the 1996 Atlanta Olympic Games Gold Medal in singles and won three Grand Slam titles. 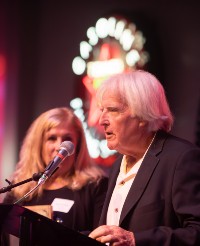 The Zartman’s have a combined 100 plus years in the sport as players, coaches and administrators. After attending San Gabriel Mission High School and Loyola-Marymount, Pat started with the USA National Team as assistant coach in 1970 and became head coach in 1974. During that time he started The Spoilers Volleyball Club in the South Bay and coached and managed the program for over 30 years along with his wife Sharkie.

She was a UCLA All-American setter-hitter for 2017 SCIVBHOF pick Andy Banachowski, and part of his first AIAW title team in 1972. She was selected as one of the 25 greatest players in Bruin history and her number 23 jersey was retired. She played for the USA Women’s National Team, including the World University Games and also played professional volleyball for five years. She was a five-time USVBA All-American and four-time national champion before turning to a successful beach career that includes being inducted into the California Beach Hall of Fame.

Pat had the Spoilers finish in the top ten at the USA championships for 32 straight years, producing numerous All-Americans and USA National Team members. His teams won eight championships and had five second place finishes. He is the longest tenured school teacher in the Torrance district in his 47th year, specializing in AP History and AP Psychology. He was the coach of 1996 Atlanta Olympic Beach Gold Medalists, Brazilians Jackie Silva and Sandra Pires. Sharkie is an author, has a master’s degree and is a professor at El Camino College. She was the head volleyball coach for 10 years, winning two state and nine conference titles. The Zartman’s have been married for 42 years and had two volleyball playing daughters Chrissie and Teri, who were both outstanding indoor and beach players. 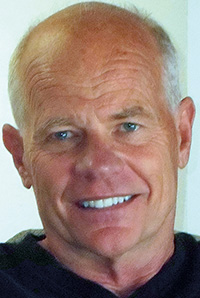 Byron Shewman attended Mar Vista High School Southwestern JC, and finished college at San Diego State. He was a USVBA All-American and a starting outside hitter for the USA National Team from 1971-75. He played on the USA team that lost to Cuba in 1975 NORCECA finals at the LA Sports Arena to just miss making the 1976 Montreal Olympics after coming close for the 1972 Munich Olympics. He kept playing in the IVA Pro League and then in Europe before retiring.

After his good friend Kirk Kilgour was hurt in a 1976 Italian League training accident, Shewman dedicated his life to helping others. He moved to Paris to begin working with the blind and mentally disabled. Then in the 1980s he went to Santa Barbara to work with Dr. Laszlo Kiraly to help amputee patients with rehabilitation. With the ability to speak three languages—English, Spanish and French—he traveled the world on missions to assist natural disaster victims.

After taking time off to publish ‘Volleyball Centennial: The First 100 Years’ in 1996 and also working an an editor at ‘Volleyball Magazine’, Shewman began coaching an inner-city volleyball team in San Diego with 2017 SCIVHOF inductee Kim Oden. That was the start of the Starlings Volleyball Club, a non-profit youth team he created to provide girls from lower socioeconomic backgrounds the opportunity to play the sport where they couldn’t afford the club dues. Today through Shewman’s work, Starlings has involved over 3,000 girls from more than 50 USA club cities and over 300 have gone on to compete in college. The Starlings motto of ‘giving all girls a chance to soar’ is put on display each June in San Diego when Shewman hosts a national competition. 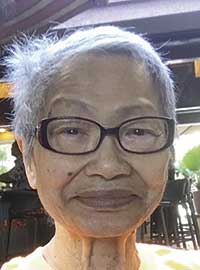 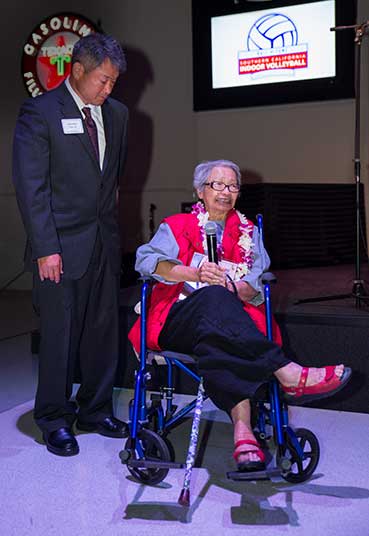 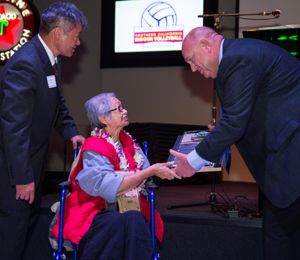 Elissa Sato has been involved in Southern California volleyball for almost 50 years and the Sato name has been around the college and international scene for almost as long. Elissa is deserving of the first SCIVBHOF Lifetime Service Award because she has probably worked and viewed more local, national and international volleyball matches than just about anybody else that could be considered for such an honor. Her volleyball work is most noted for being the college match scorekeeper starting in the 1970s. She was a regular at UCLA, USC, Pepperdine and Loyola-Marymount matches and did that job into the 2000s. She also assisted the volleyball programs at Santa Monica High School and Santa Monica College where her children competed. She also helped in running summer volleyball camps for Marv Dunphy at Pepperdine.

However, she and her deceased husband Richard are most known for the Sato family name and the VB accomplishments of her children and grandchildren that started at Santa Monica High School. Gary Sato was part of Pepperdine’s 1978 & 2005 NCAA title teams and is still coaching today at USC. He helped coach his younger brother Eric, who was the defensive specialist on the 1988 USA Gold Medal team and 1992 Bronze Medal squad. His sister Liane competed in the 1988 Olympics and won a bronze in 1992 Games. Eric coaches in San Diego and Liane returned to Santa Monica HS and has won a California State Title. Two other brothers Scott (San Diego State) and Glenn (Loyola-Marymount) also played college volleyball. Elissa has grandchildren playing in college (Andrew at Long Beach State, Katie at CS Northridge, Blossom at Mississippi State and Malia will start college in the fall at USC). Elissa still tries to attend as many matches as possible.