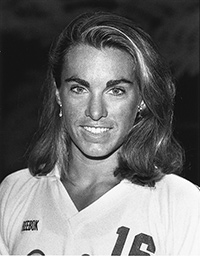 Holly was a California State and CIF Championship setter at Mira Costa HS in the South Bay where her junior and senior year teams went 62-1. She went to UC Berkeley and set the Bears to NCAA Tournament after winning Pac-10 Freshman of the Year honors. She transferred to UCLA as a senior and led the Bruins to 1990 NCAA title, was selected All-Tournament and made the All-American team. She worked as a Bruin Graduate Asst. for 1991 NCAA title team before turning to one of the all-time top beach careers.

She was a three-time USA Beach Olympian, while also working as a TV sports broadcaster for indoor and beach VB for ESPN and Pac-12 Network. Holly competed in the first Olympic Beach Volleyball Games in Atlanta in 1996, finishing fifth, then recorded her second consecutive fifth-place finish at the 2000 Sydney Games, and reached the medal podium with a bronze finish with UCLA teammate Elaine Youngs at the 2004 Athens Games. Overall, Holly won a then record 72 career beach titles, including 19 FIVB titles, two FIVB Grand Slams and 53 USA domestic titles. In 2002, she became the first woman worldwide to surpass $1 million in career earnings. The 5-8 McPeak was inducted into the International Volleyball Hall of Fame in 2009. In 2020 she was inducted into the USAV Beach HOF and was the AVCA Beach Coach of the Year.