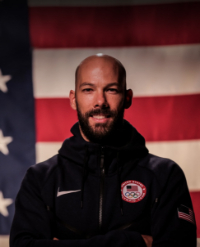 Reid was born in Virginia, and then played HS volleyball at Mountain Pointe in Arizona before attending Loyola-Marymount University. He was part of the start of Arizona boys’ volleyball and won the 1995 State Championship as a setter. At LMU he was a three-time AVCA College All-American outside hitter (1998-2000) when he led the team in kills and aces before moving onto the USA National Team.

He played in the 1999 Pan-American Games and then professionally in Italy. He was captain of the 2003 USA Pan-American Games team and played on the 2004 USA Olympic team in Athens, which finished fourth. The 6-4 all-around athlete helped the USA to the 2008 Beijing Olympic Games gold medal after winning the World League and was fourth in Olympic scoring. He played for the USA at the 2012 London Olympic Games when he was USVA Player of the Year. He made his fourth Olympic Games in 2016 when he came off the bench to spark the USA to a bronze medal in Rio to end a 17-year indoor professional career. Turning to the beach, he reached a sand highlight when he won the 2019 AVP Manhattan Beach Open with partner Trevor Crabb. He was inducted into the Loyola-Marymount Athletics Hall of Fame in 2009. He helped start the internet radio show, “The NET Live” which ran throughout the 2010s.