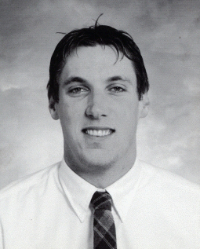 Ryan was an All-CIF player and League MVP at Highland HS in the Palmdale area and then a college star middle blocker at Brigham Young University (BYU) where he was a rare four-time All-American as the Cougar program excelled nationally for the first time. He was the Volleyball Magazine National Freshman of the Year in 1996 and by 1999 he was first team All-American, the MPSF and National Player of the Year, plus made the All-Tournament team when he led BYU to its first NCAA title.

The 6-8 standout led the NCAA in hitting percentage and blocks as a senior. He played for the USA National Team from 1998-2008, starting most matches on the USA Olympic Teams in 2000, 2004 and 2008. He won an Olympic Gold Medal at 2008 Beijing and also won three NORCECA titles. He was USA Player of the Year in 2007. He played overseas for nine seasons, including six in Italy. He co-coached BYU in 2006 before returning to the national team. He was inducted into the BYU Athletics Hall of Fame in 2009.