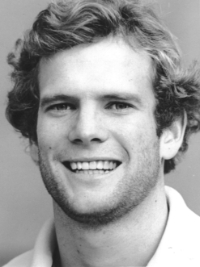 One of the greatest USC indoor players of all-time and best athletes. Hovland was a three-time All-American and NCAA All-Tournament pick as a 6-5 dominating middle blocker from 1978-1981. He was the vocal team leader for the 1980 NCAA title team, and the 1979 and 1981 finalists. Prior to USC, he was selected as the So. Calif. High School Athlete of the Year at Westchester where he started for the football, basketball and volleyball teams before concentrating on VB in college.

He played with USA National Team and eight years overseas in the Italian league after college before turning his career to becoming an all-time beach player. He was a 6-time USVBA All-American, including four indoor titles and won a silver medal with the USA National Team at the 1982 NORCECA Championships. Selected for the 2020 USA Volleyball Hall of Fame, Hovland was named in 2000 to the Volleyball Magazine’s All-Century Team. He won 60 beach tournaments world-wide and over $1 million dollars before retiring in 2000 and was inducted then into the CBVA HOF. He was inducted into the USC Athletics Hall of Fame in 2009.