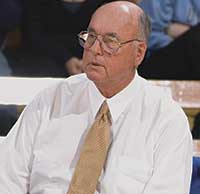 Scates also set NCAA records with 48 straight victories, 83 consecutive home court wins, 14 straight NCAA playoff wins and is the only person to ever coach four straight NCAA men’s titles (1981-84) and three straight (1970-72, 1974-76). He has assisted the USA program internationally with his scouting skills. He is a 1993 member of the International VB HOF and was the first recipient of USA Volleyball’s ‘All-Time Great Volleyball Coaches’ award. The Los Angeles City HS Hall of Fame selection was one of the coaches for USA Volleyball’s All-Era 75th Anniversary Team (1978-2003). He made the AVCA HOF in 2004 and was recently selected as the Pac-12 Coach of the 20th Century.