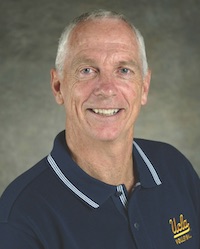 Andy Banachowski was a legendary women’s collegiate volleyball coach. For UCLA he won six national women’s championships (1972, 74, 75, 84, 90, 91) and had numerous trips to the Volley Four before retiring after the 2009 season. He left #1 in all-time victories with 1106 in 45 seasons as head coach.

Banachowski was a UCLA college setter for Al Scates where the Bruins won USVBA titles in 1965 and 1967. He earned All-American honors in 1967. After his playing career he became an assistant coach for Scates from 1972-77 while coaching the women’s team. He was part of three NCAA men’s title teams. He also assisted the USA program internationally as an advisor at the 1992 and 1996 Olympic Games. His daughter Amy was part of his 1991 NCAA title team.

On October 24, 1997, Banachowski became the first women’s volleyball coach to be inducted into the International Volleyball Hall of Fame in Holyoke. He received USA Volleyball’s highest honor: the ‘All-Time Great Coach’ award, and also was selected for the George L. Fisher ‘Leader in Volleyball’ award for his off-court work, such as helping start the American Volleyball Coaches Association (AVCA). Andy was inducted into the first AVCA HOF class in 2003, plus is in both the National Polish-American, and the UCLA Athletic Hall of Fames. He was recently selected as the Pac-12 Women’s Volleyball Coach of the Century.