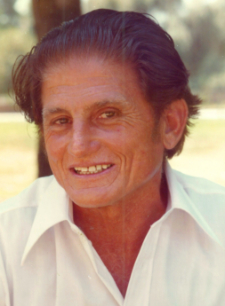 He started playing indoor volleyball in junior high school in Hollywood and on the beach in 1935. Holtzman excelled at the indoor game, competing for the Hollywood YMCA Team in the 1940s and 50s, winning numerous national championships and All-American honors for his setting, hitting and ball control. He helped coach the top 1964 USVBA players that were selected to for the first USA Olympic Teams.

He kept playing indoor volleyball until 2004 when at the age of 82 he stopped when the Hollywood YMCA rescheduled “Volleyball-Play” to 10 p.m. He and 2020 SCIVBHOF inductee Manny Saenz formed a near-unbeatable tandem on the beach, winning 10 “Open” tournaments beginning with his first tournament at the 1948 State Beach Men’s Open. Holtzman and 2017 SCIVBHOF inductee Gene Selznick formed another tremendous combination as they won 18 out of 20 “Open” tournaments beginning in 1955. USA Volleyball recognized him on its 75th Anniversary Beach “All-Era Team” (1928-1987). He was inducted into International VB HOF in 2006 and inducted into California Beach HOF in 1992. He passed away in April of 2012.