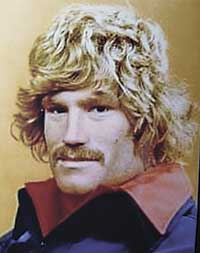 Chris Marlowe was a two-sport standout at Pacific Palisades HS. He is a rarity in the fact he won LA City titles as a starter in both volleyball and basketball. He played at San Diego State on a basketball scholarship, but he excelled nationally in volleyball. He started at middle blocker for Jack Henn in leading the Aztecs to their only NCAA title in 1973, after being runner-up in 1972. He moved to setter in the spring of 1973 when he started training with the USA National Team program. After the disappointment of missing the 1976 Olympics and the boycott of 1980 games, Marlowe returned to the USA program and was captain of the 1984 USA Indoor Gold Medal winning team in Los Angeles. During his indoor career he was voted USVBA Player of the Year in 1976 and 1978 and was a multi-time USVBA All-American.

While finishing his USA playing career Marlowe began a sports broadcasting career, starting with the NCAA Indoor Volleyball finals for ABC Sports, then CBS Sports and finally ESPN from the later 1970s to early 2000s. He started as the expert commentator and then became the national play-by-play voice of indoor volleyball in the 1990s. NBC made him the Olympic Volleyball lead announcer for the 1992 Barcelona Games before moving him to the beach in 2000. He still does Olympic Beach today. In 2004 the NBA’s Denver Nuggets hired him as their play-by-play voice. That is his main position to go with also broadcasting selected Pac-12 Network women’s volleyball and NBC spring/summer beach VB.