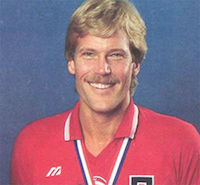 Craig Buck was one of the first dominant ‘big men’ in the sport and at 6-9 he was perhaps the most feared net attacker of all-time.  The All-City player at Taft HS in Woodland Hills went on to an All-American college career as a Pepperdine middle blocker for Marv Dunphy.  He played on the USA Junior National Team from 1976-79 and was MVP in 1978.  He moved to the National Team in 1981 and helped the USA begin its rise to an international power.  He was a starting MB on both the 1984 and 1988 USA Olympic Gold Medal winning teams, the USA’s first in history.  He was selected as the best blocker at both Olympics and best server in the 1984 Games.

Buck was part of the USA National Team when it won volleyball’s “Triple Crown”, with Gold Medals at the 1984 Olympics, 1985 World Cup, and the 1986 World Championships.  He was named All-Tournament at the 1986 World Cup, and was voted MVP of the 1987 Savin International Tournament. He won Gold at the 1987 Pan-American Games. He was a three-time USVBA All-American and Most Outstanding Player in 1987.  He was named the 1990 USA Volleyball Player of the Year by the USA Olympic Committee.  His success propelled him to become a member of the International VB HOF in 1998 and a member of USAV 75th Anniversary Team (1978-2003).