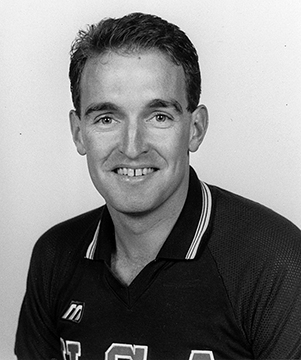 David has the distinction of being a volleyball champion on each playing level from high school to college to the Olympics. He was a Los Angeles City VB title winner at Palisades HS, then went to UCLA and was a key part of 3 NCAA title teams in 1979, 81 and 82 and was twice All-American as the primary passer and starting outside hitter (the 1982 team was the second unbeaten in NCAA history).

He then moved to the USA National Team and played as a part-time starter at outside hitter for both the gold medal winning teams at the 1984 Los Angeles and 1988 Seoul Olympic Games. He is one of only a handful of VB World Olympians in history with 2 Olympic Gold Medals (he was one of four Bruins on the 1988 team—all in the SCIVBHOF-Karch Kiraly, Ricci Luyties & Doug Partie).  He also represented the USA in the 1983 and 1987 Pan American Games, winning gold in 1987 and was part of the 1986 World Championship team. He then finished his international career in Italy before retiring and going into the radio business. His brother J.B. also played for UCLA volleyball.