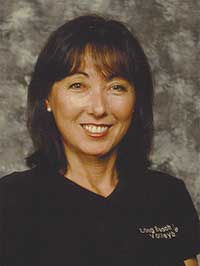 Debbie Green started playing USVBA open volleyball while attending Westminster HS because there were no clubs for youth players then. She became the youngest USVBA All-American at age 16 in 1975 when she set Chuck Erbe’s Adidas team of HS students to the national title. She then went to USC where she set the Trojans to two AIAW titles in 1976 & 77, losing just one match (72-1) and twice being named All-American. She won the Broderick Award as the top college VB player in 1977-78 and then went onto the USA National Team. After the disappointment of the 1980 Olympic boycott, Green set the USA to the 1984 Los Angeles Olympics Silver Medal, the first USA women’s Olympic volleyball medal in history. Green also set the USA to gold and silver medals at the 1979 and 1983 Pan-American Games teams.

After her playing career that included winning the 1987 and 88 Major League Volleyball (MVL) titles for the Los Angeles Starlites, Green turned to coaching. She spent 23 years as the assistant to Brian Gimmillaro at Long Beach State where the 49ers won NCAA titles in 1989, 93, and 98. She was spent two-years for UCSB’s Kathy Gregory when he daughter was the starting setter. She is currently an assistant coach to Misty May-Treanor at Long Beach CC. She was the first VB player inducted into the Orange County HOF in 1998 and received the USVBA ‘All-Time Great Player’ award in 1986. In 1995 she made the International VB HOF and also was a 2004 AVCA College VB HOF pick. She was a member of the USAV 75th Anniversary Team (1978-2003) and named to the Pac-12 All-Century team.