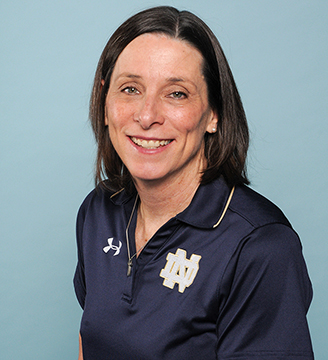 Debbie went to El Segundo HS, and then captained USC to a dominating 72-1 record as a 5-8 starting outside hitter for Coach Chuck Erbe as the Trojans won two AIAW titles in 1976 & 77. She won Collegiate All-American honors and the Mikasa ‘Best All-Around’ College Player award both years. She started playing with USA National Team at age 17 in the World Championships and was Co-Captain of the 1980 USA Olympic team that boycotted.

She was an 8-time USVBA All-American and played on four USVBA championship teams. After retiring, she was a 30-year women’s college head coach at Arizona State and then Notre Dame with numerous NCAA berths, 11-time conference coach of the year and over 600 career wins.  She was the 1988 Seoul USA Olympic Women’s Assistant Coach. USA Volleyball named Landreth Brown an ‘All-Time Great Player’ in 1995. She was inducted into AVCA Hall of Fame in 2017. She is currently the Saint Joseph HS Athletic Director in South Bend. She and her husband Dennis have two sons that both graduated from Notre Dame.