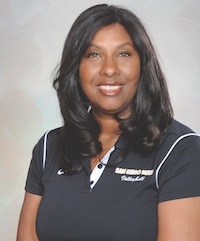 Deitre Collins-Parker lived in the Lancaster area and made the long 100-mile round trip drive to play club ball in the South Bay to develop her game. Without ever visiting, she attended the University of Hawaii to play for Dave Shoji where she was a three-time All-American and led the Rainbow Wahine to 2 NCAA titles (1982, 83). Twice named to the NCAA All-Tournament team, she still holds the record for solo blocks. Selected as the nation’s top VB player (1983, 84), she was the first volleyball player to ever win the Broderick Cup as the nation’s top overall female collegiate athlete. She made the first NCAA All-Decade team.

Collins-Parker was selected for the NCAA Division I Women’s Volleyball 25th Anniversary Team in October, 2005.  She received the NCAA Silver Anniversary Award during the 2009 NCAA Convention in Washington, D.C.  She became the starting middle blocker on the 1988 USA Olympic Team and an alternate in 1992. She competed in over 130 international matches representing the USA.  Since 2009 she has been the head women’s coach at San Diego State.  She previously served as the head coach at both Cornell and UNLV. She has coached internationally three times with the USA Jr. program and was inducted into the AVCA College VB HOF in 2008.