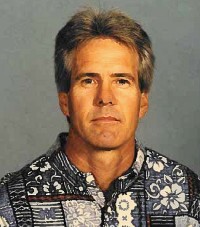 He is perhaps the greatest all-around player to attend San Diego State after starting his volleyball career at Mira Costa HS in the South Bay. At San Diego State he was NCAA Tournament MVP in leading the Aztecs to the 1973 NCAA title while playing for also SCIVBHOF inductee Jack Henn. Duncan skipped the 1972 season trying to qualify for the Olympics and led his USVBA Team to the National Championship. He won three USVBA titles and was a multi-time All-American. The 6-5 McFarland was a key member of the USA National Team from 1969-1975 and part of 1972, 76 teams that just missed qualifying for Olympics.

He won a silver medal at the 1971 Pan-American Games and also played three years in the IVA professional league after college before turning to coaching. He won a NCAA Division III women’s title coaching at UC San Diego in 1997 after previously being the long-time men’s coach there. He also coached at his alma mater before the SDSU program was eliminated. He was selected for t he USA ’All-Time Great Player’ award in 2015. He is a member of the San Diego State Athletic Hall of Fame.