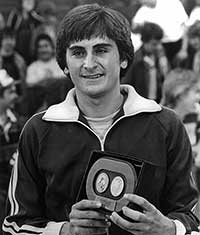 Dusty Dvorak was a solid Laguna Beach High School football and basketball player with opportunities for a college scholarship until he was persuaded into an All-American volleyball setting career by Coach Rolf Engen. He switched to the indoor game for the first time as a HS sophomore and immediately excelled as a winner at every level of his career. He took his talents to USC and set the Trojans to their first and second NCAA titles in 1977 (freshman) and 1980 (senior) for Coach Ernie Hix. He was the NCAA MVP in 1980 after being the only freshman on the 1977 All-Tournament team. He finished as a four-time collegiate All-American. He also won USVBA national titles in both 1979 and 81 and was MVP in 1981. He then brought his setting skills and leadership to the USA National Team with continued success. The USA won the NORCECA Games to qualify for the 1984 Olympic Games and he was selected as one of top three players at the 1983 USSR Savin Cup.

He was the starting setter for 1984 USA Olympic Gold Medal winning team in Los Angeles, and then set the USA to 1985 World Cup and 1986 World Championship titles to complete the triple crown. He was named the top setter in the world and then left the USA program after 1986 to play overseas. Both his brother Rudy at USC and sister Deidra at Stanford played in the NCAA Volleyball finals. Dusty became a member of the International VB HOF in 1998, was named an ‘All-Time Great Player’ award in 1999. He was voted as a member of the USAV 75th Anniversary Team (1978-2003) and recently made the Pac-12 All-Century team.