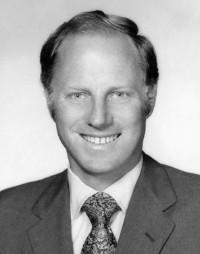 Ernie is known as ‘The father of USC Men’s Volleyball’ and the person most influential in making the Trojan program a national success. He coached USC to its first two NCAA Titles in 1977 and 1980 and finished as NCAA runner-up in both 1979 and 81 in the best four-year stretch in school history before retiring. Hix attended USC as a basketball player in the 1950s after twice leading his Hollywood High School team to the LA City finals.

He started at USC volleyball in the early 1970s as assistant coach and became head coach in 1974, which began the Trojan national rise. He not only coached numerous All-Americans, but raised the necessary funds so the program would have the full NCAA scholarship allotment needed to win. He brought in SCIVBHOF member Bob Yoder as his successor, who continued the NCAA success. Hix had a 138-49 (.738) record in 7 seasons (1974-81). His former players and coaches remember him yearly at ‘the Ernie Event’ on the Trojan campus. He passed away on June 5, 2016.