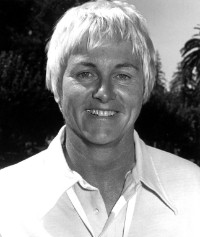 Jane moved to Southern California in the early 1950s after growing up in Buffalo where she is in the University of Buffalo Athletic HOF.  She was the most dominant female player of her era from 1954-1968. She was a 5-7 outside hitter, who also set, and led her USVBA teams to 13 national championships, winning All-American honors each year and was USVBA MVP five times.  She played primarily for the Long Beach Ahern Shamrocks.