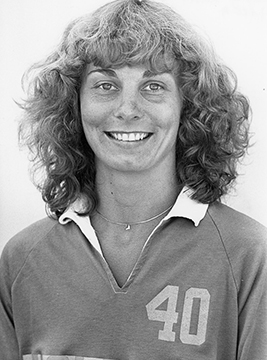 Jeanne has achieved excellence as both a player and a coach. She was All-CIF in volleyball and basketball at Mission Viejo HS and led UCLA to the first NCAA women’s volleyball finals in 1981 while also being a part-time starting center on basketball team. She was a multi-time collegiate VB All-American and then went on to win a 1984 Los Angeles Olympic Games Silver Medal as part of the USA Indoor Team.

After the Olympics she played in Italy where she was the 1985 MVP before turning to coaching at her alma mater. She was the #1 assistant and lead recruiter for two Bruin NCAA title teams in 1990 and 1991, plus several other Volley Four teams.  She then coached internationally as the USA Women’s Assistant at the 1996 Atlanta Olympics. She was a successful club coach for Wave in San Diego area for over 10 years producing numerous college scholarship athletes, including her daughter Kelly to UCLA (her sons Connor & Jake also graduated from UCLA). After playing on the four-person and AVP tours, she coached on the AVP circuit. She was inducted into the UCLA Athletic HOF in 2000.