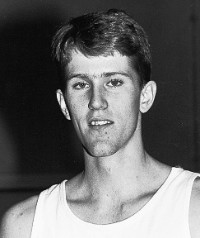 Jeff came to UCLA from Wisconsin and became a college star after redshirting his first season. He was the National Freshman of the Year in 1992 playing for SCIVBHOF member Al Scates. He was a two-time VB Magazine collegiate MVP (the first to win back-to-back awards in 1994 and 1995, and three-time All-American. He won NCAA titles in 1993 (set NCAA record with .867 hitting percentage, while being co-NCAA MVP) and 1995 (finished with school record 123 aces while being named NCAA MVP).

The 6-8 Nygaard then became a 3-time Olympian, the first two indoors (1996, 2000) and a rare beach volleyball Olympian after indoors (2004, teaming with Dain Blanton). After retiring, Nygaard went into coaching, first volunteering at USC, then as an assistant before being named the head coach in 2015. He led the 2019 Trojans to the NCAA Tournament. He has also been working with the USA National team program. Nygaard played 10 years on the AVP pro beach tour and was voted MVP and won 7 tournaments. He was named to the Pac-12 All-Century team in 2016 and has been inducted into the UCLA Athletics Hall of Fame.