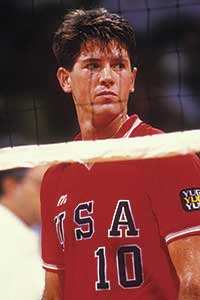 Jeff Stork was an All-City player at Taft High School in Woodland Hills before moving onto a three-time All-American setting/hitting career at Pepperdine University for Marv Dunphy. He was a two-time All-Tournament selection in leading the Waves to NCAA runner-up finishes in 1983 and 1984 and was part of the 1985 NCAA title team as a graduate assistant coach. He then went to the USA National Team program and took Dusty Dvorak’s place as the lead setter. With Doug Partie, he won the 1987 USA Team Players Award and then set the USA team to the 1988 Olympic Games Gold Medal in Seoul. He continued with the program helping the team to a bronze medal at the 1992 Barcelona Olympics and made a third Olympic Team in 1996 in Atlanta.

Stork then retired and eventually returned locally to become an assistant men’s coach at Pepperdine. Before Pepperdine he spent a year as an assistant for Laurel Brassey Iversen at New Mexico. Stork then became the head women’s coach at Cal State University Northridge in 2002 where he has been since. This includes making NCAA appearances, two recent Big West Coach of the Year honors and over 200 career victories. During his time at CSUN, Stork helped coach the USA National Team in the World League and also the USA Youth Team. Stork was named to the USA Volleyball 75th Anniversary All-Era Team (1978-2003) and became a member of the International VB HOF in 2012. He has two sons who played Division I men’s volleyball and a daughter who played for the CSUN women’s beach team.