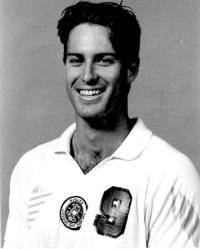 Earning All-CIF honors  at Mount Carmel High School in San Diego, Hyden then went to San Diego State where he was Team MVP all four years in college. He earned first-team All-American honors in 1994 and 1995 and set a NCAA record for most kills in a match (56). He then started playing for the USA National Team. He made the final spot for the 1996 USA Atlanta Olympic team due to an injury and excelled for his coach and fellow 2021 SCIVBHOF inductee Fred Sturm. Hyden was voted Team MVP as the USA finished 9th.

Hyden continued to compete with the USA team while playing internationally, first in the Italian league in 1997, then in the Brazilian Super league. Hyden was a part-time starter for the 2000 USA Sydney Olympic team under Doug Beal before the 6-5 outside hitter retired indoors. Hyden then took his talents to the beach. Remarkably, Hyden made at least one beach final from 2004-2017, a span of 14 years, and just missed making the 2016 USA Rio Beach Olympic team. He has won 28 beach events through 2021. In 2010 he was inducted into the San Diego State Athletics Hall of Fame. He recently started the Hyden Beach Academy with his wife in Tennessee.