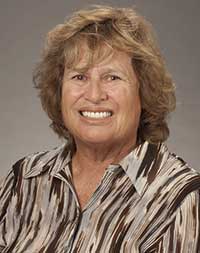 Kathy Gregory attended Immaculate Heart HS in Los Angeles and then Cal State Los Angeles while playing at the highest level of open indoor volleyball. She was a dominant player for the USA National Team at both the Pan-American and World Games. She was a 15-time USVBA All-American and 4-time MVP, while playing with the Shamrocks, Dippers, Mavericks and Windjammers. She was captain for the San Diego Breakers of the IVA pro league in the later 1970s and was twice voted league MVP. Gregory became head coach at UC Santa Barbara in 1975 and was successful there for 38 seasons.

The Gauchos had numerous NCAA appearances, including making the Elite 8 and four times in the Sweet 16. She retired after the 2012 season as 5th all-time nationally in college wins with 882. Gregory was presented with the 1981 ‘Salute to Women’ award for her dedication to women’s sports growth through her volleyball experiences. In 1984 she was selected for the USVBA ‘All-Time Great Player’ award. In 1989 she became only the third female ever inducted into the International VB HOF. She was also a legendary beach player while competing indoors. She was a member of USVBA 75th Anniversary Team (1948-77).