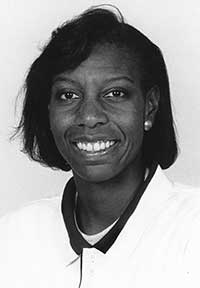 Kim Oden was a standout volleyball player for both Irvine HS and the Orange County VB Club under Charlie Brande. She led both her high school and club teams to titles with her overpowering net play and was a three-time USVBA All-American. She played her college volleyball at Stanford where she led the Cardinal to the NCAA finals in 1984 and 85, plus the NCAA Volley Four in 1982 and 83. Her college honors included finishing as the two-time National Player of the Year, three-time All-American, three-time Pac-10 Player of the Year, a four-time All-Conference pick and the AVCA Player of the Decade. She also made the COSIDA All-Academic Team and won the Honda-Broderick Award as the top college player in 1985 playing for Fred Sturm and Don Shaw.

After graduating with a public policy degree, Oden joined the USA National Team and was captain for both the 1988 Seoul and 1992 Barcelona Olympic teams. The 1992 team won the Olympic Bronze Medal. In 1988 she was voted ‘Best Hitter’ for having the highest attack percentage. She was able to play each Olympics with one of her younger volleyball sisters Elaina and Bev Oden. After retiring from the indoor game, Oden went into women’s college coaching. She worked as an assistant coach at Stanford, North Carolina, Duke and Iowa State. She then coached for six years at St. Francis HS in No. California and won two state titles. She is now the Associate College Counselor at Campbell Hall Prep in Studio City. Oden was a member of USA VB 75th Anniversary Team (1978-2003) and was recently named to the Pac-12 All-Century team.