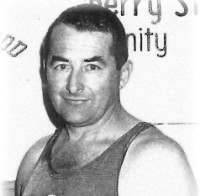 In 1955 Saenz was voted by the Helms Athletic Foundation as Los Angeles County’s volleyball ‘Player of the Half Century’ for both his indoor and beach successes. He was the only male player to be recognized. He was the 5-6 setter for the Hollywood YMCA teams in the 1940s and into the 1950s and won 5 USVBA National Championships and was an 8-time All-American. USA Volleyball selected him to the ‘All-Era’ team as an Indoor Player, Beach Player, and as a Coach, the first time in history a person was on three era teams.

He dominated the beach game in the 1940s and 50s playing primarily with Bernie Holtzman. He was selected for the USA ‘All-Time Great Player’ award in 1976. Considered as the first great coach of female players, he led the Santa Monica Mariners women’s team to 6 straight USVBA titles from 1955-60. He coached the USA Women to second place at 1959 Pan-American Games. He was inducted into the CBVA Beach VB HOF in 2005. In 2006 he was named a USA Volleyball ‘All-Time Great Coach’ in the Pioneer Division. He was deceased in 2000.