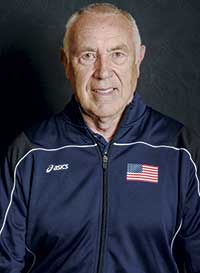 Marv Dunphy started his volleyball playing career at Woodland Hill’s Pierce College and transferred in 1972 to play middle blocker for Pepperdine. He has been in Malibu ever since. He started coaching at Pepperdine 43 years ago and was head coach through 2017 with over 600 career wins. He led Pepperdine to 4 NCAA titles (1978, 85, 92 and 2005) and the Waves also won the 1986 NCAA crown while he was on sabbatical coaching the USA for the 1988 Seoul Olympic Games. Dunphy, who has a master’s degree in physical education from USC, left Pepperdine after the 1978 NCAA title to obtain his doctorate degree in education at BYU in 1981. His thesis was about legendary basketball coach John Wooden. Dr. Dunphy then returned to Pepperdine to coach the Waves back to an NCAA powerhouse, making the NCAA finals in 1983 and 84 before winning the title again in 1985.

He coached the USA to the 1988 Olympic Gold Medal after winning the 1987 Pan-American Games, 1986 World Championships and 1985 World Cup. In 1988 he was selected as the FIVB Coach of the Year. Since that time he has helped as an Olympic assistant men’s and women’s coach (men 2000, women 2016) and consultanted at numerous Olympic Games (USA men in 1996, 2004, 2008–gold medal, and USA women 2012–silver medal). He is responsible for numerous Olympians and All-Americans, written several VB books and was selected as a coaching member of the International VB HOF in 1994. He was inducted into the AVCA College HOF in 2009 and was a member of the USAV 75th Anniversary Coaching Staff (1978-2003).