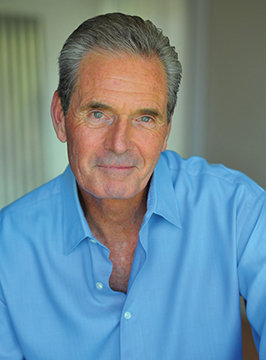 Paul started as a football and basketball player at Notre Dame HS in Sherman Oaks and went to Oregon on basketball scholarship. While also playing on the beach, he played indoors on the Duck Club team before transferring to Loyola- Marymount to begin his NCAA college volleyball career. He was a collegiate All-American at Loyola and started playing with the USA National Team after the team failed to qualify for the 1976 Olympics. He was the USVBA MVP in 1977, 1979 and 1982. After the 1980 boycott, Sunderland kept training and made the 1984 Olympic Team as one of the oldest players and won gold in Los Angeles, to go with the 1983 NORCECA Championships.

After retiring, he has enjoyed over a 30-year broadcasting career, primarily indoors and has been on every NBC Olympic Indoor VB broadcast from 1992-2016. He did play-by-play for both the 2018 NCAA Men’s and Women’s Championships. He also broadcast numerous other sports for networks like ESPN, Fox Sports and Turner with his vast sports knowledge. He won two Emmys for his talents. In 1986 he was inducted into the USVBA and Loyola-Marymount Athletic Halls of Fame