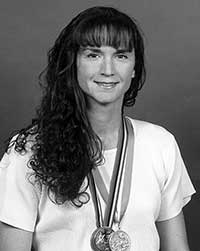 Paula Weishoff was a volleyball standout at a young age while first attending West Torrance HS and then USC. She led the Trojans as a freshman to the 1980 AIAW Title for Chuck Erbe. She won All-American and Most Valuable Player awards in her only college season before joining the USA National Team program. She also won MVP and was an All-American at the 1980 US Junior Olympics. She then became the youngest USA player for the 1984 Los Angeles Olympic Team and was instrumental in the team winning the silver medal, the first in USA history. She was named as the USA Team MVP and won the USOC Female Athlete of the Year award.

Weishoff was named Outstanding Player and to the All-Spectacular Team at the 1992 Barcelona Olympics when she helped lead the USA to the bronze medal. She played in her third Olympics in the 1996 Atlanta Games and was the team’s top server. She then turned to coaching. Internationally she was the assistant coach for the 2012 USA Women’s Olympic Team that won the silver medal. She was the USC assistant women’s coach for the 2002 & 03 NCAA Title teams and inducted into the Trojan Athletic Hall of Fame in 2005. She then coached successfully as the women’s head coach at Concordia Irvine and UC Irvine before returning to Concordia Irvine for 2015. She won the conference title in 2016. In 1988 she became a member of the International VB HOF and was a member of the USAV 75th Anniversary Team (1978-2003).