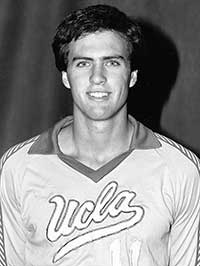 Ricci Luyties attended Pacific Palisades HS where he was twice the Los Angeles City Co-Player of the Year while setting and hitting his team to the City finals. He then went to UCLA to play for Al Scates where he became the only four-year NCAA title winning match starter in college history as the Bruins won in 1981, 82, 83 & 84. He was both an All-American and NCAA MVP in 1983 and 84 in the 6-2 system where he had to both set and hit. The 1984 team was a NCAA record 38-0 and the 1982 title team was also unbeaten (2 of the 3 in NCAA history). Luyties finished his college career with a 126-7 record, second best in NCAA history behind Karch Kiraly.

After college Luyties began setting for the USA national program and started the first three matches for the 1988 Seoul Olympics Gold Medal winning team. He also won gold at both the 1983 and 1987 Pan-American Games. He was with the national team from 1981-1988 and then had a strong beach career before turning to college coaching in the 2000s. He first worked as a women’s assistant at Colorado and then became the head women’s coach at Southern Mississippi. In 2010 he returned to West Coast as the head women’s coach at UC San Diego where he has been since (his first coaching job was at La Jolla High School). He has taken his team to the NCAA Division II Tournament and already has over 200 career wins. He went into the UCLA HOF in 1995. Luyties recently made the Pac-12 All-Century team.