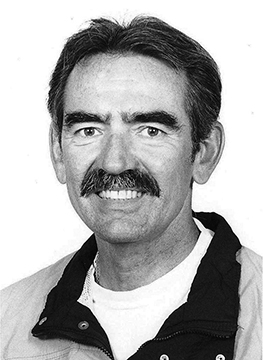 Rudy came West from New York for volleyball and started for the 1968 USA Olympic Team in Mexico City after being an alternate for the 1964 team. He continued with the USA team through 1972.  He was the USA men’s assistant Olympic coach for 1996 Atlanta. He was a top player-coach in the IVA professional league while college coaching in the 1970s. His first college coaching job was at UCLA in 1965 for Al Scates when Pauley Pavilion opened and Bruins won USVBA title.

He became the UCSB men’s head coach when NCAA play began and led the Gauchos to 3 Volley Fours (1971, 72, 74) and just missed winning 1974 NCAA title. He then became the first coach to ever win USVBA Open and Collegiate titles in same year in 1974. He then took over as men’s and women’s coach at San Diego State, guiding the women to first two NCAA Volley Fours in 1981 and 82, plus many trips to NCAA Tournament. He is a member of AVCA Hall of Fame. The ‘Tasmanian Devil’ was selected for USA ‘All-Time Great Player’ award in 1976. His brother Ernie was inducted into the 2018 SCIVBHOF. Rudy’s  wife Colleen was also an outstanding college coach.