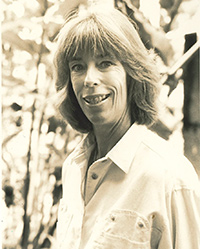 She was born locally in Inglewood, went to Mira Costa HS and became a standout player for the first two USA Olympic teams in 1964 Tokyo and 1968 Mexico City, while attending Long Beach State. She also played on the 1967 Pan-American Games gold medal winning team and at the World Games. She was a 5-time USVBA All-American and was selected as the 1969 USVBA Player of the Year. She was also a three-year backcourt specialist for the Los Angeles Stars of the IVL, the 1975 pro-league champions.

In 1999 the USVBA selected her as for its “All-time Great Female Player” honor. The Hawaii-Hilo college coach became a Hawaii Sports Hall of Fame member by winning seven titles and being the five-time National Coach of the Year. She won AIAW titles in 1979 & ‘81, and NAIA crowns in 1981, ‘82, ‘83, ‘84 and ‘88 (she is the only coach to win two titles in same year when Hawaii-Hilo was allowed to compete in both the 1981 AIAW & NAIA Tournaments). She won over 500 college matches and coached for over 50 years finishing her career at Hawaii Preparatory Academy. She was inducted into the Long Beach Athletics HOF in 1986, and was named to the NAIA HOF in 1988.