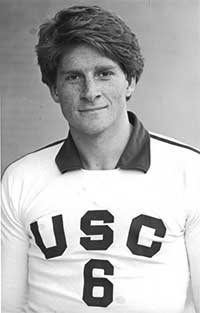 Steve Timmons went to Newport Harbor HS and Orange Coast College, before the JC standout transferred to USC where his tremendous career took off. He was instrumental under Coach Ernie Hix in the Trojans winning the 1980 NCAA title, finishing runner-up in 81 and making the Volley Four in 82. He was a two-time All-American, and made the 1980 & 81 NCAA All-Tournament teams. Steve moved to the USA National Team in 1983 and became known throughout the world for revolutionizing the back-court attack and his red flat top hairstyle. He had a tremendous 1984 Los Angeles Olympics as the opposite hitter for the USA Gold Medal winning team and the FIVB named Steve as the Most Valuable Player.

Timmons won his second Gold Medal at the 1988 Seoul Olympic Games where he was awarded ‘Best Blocker’ by the FIVB and won USA VB Player of the Year. He continued his top international play by helping the 1992 USA team to a bronze medal at the Barcelona Olympics to finish as a rare three-time Olympic indoor medalist. He was also named to the 1992 Olympics All Spectacular Team. He was a key part of the USA winning the 1985 World Cup, 1986 World Championship and 1987 Savin Cup team titles and was MVP of the 1988 Super Four Tournament after the Olympics. He also won gold at the 1987 Pan-American Games. He was selected as a member of the International VB HOF in 1998 and a member of the USA VB 75th Anniversary Team (1978-2003).