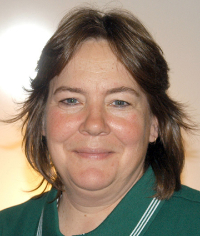 Sue attended Colton High School in San Bernardino County where she starred in volleyball, basketball, softball and field hockey. She then went to USC for a top college career under Chuck Erbe. She led the Trojans to the 1977 AIAW Championship earning All-American honors before moving to the USA National Team from 1978-86 along with playing internationally in Japan. She was the captain of the 1984 USA Olympic silver medal team in Los Angeles after having to endure the 1980 USA Olympic boycott. She was USVBA MVP in 1986 (4-time USVBA All-American).

She had a long college coaching career that included being the assistant coach for the 2008 USA Women’s Olympic silver medal team in Beijing. She was a college head coach at the University of Pittsburgh (won 4 straight conference titles 1989-92) and Cal-Berkeley (1995-98) and Asst. Coach at Arizona State, Notre Dame and Florida State. She finished her coaching career as the Humboldt State head coach (2002-2012). She was also a head coach in Germany. She is a member of AVCA College Volleyball Hall of Fame and a member of USA VB 75th Anniversary Team (1978-2002). Her USC number 4 jersey hangs at the Galen Center and she is a member of the Colton HS Hall of Fame.