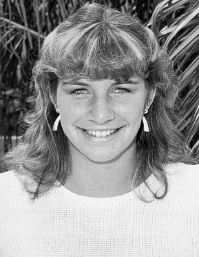 Tammy was a standout collegiate player at Arizona State, playing in three NCAA Tournaments, making the 1985 & 1986 AVCA All-American teams. She was the Pac-10 Player of the Decade for the 1980s, being coached at ASU by 2019 SCIVBHOF member Debbie Brown. Leibl played internationally in the World University Games before going to the USA National Team for ten years (1987-96). She was a rare American player to have competed for three USA Olympic Teams (1988, 1992, 1996), winning an Olympic bronze medal in 1992 in Barcelona.

She was captain of the USA National Team from 1993-1996 and the first American to compete in over 400 international matches. She was the 1993 USOC Female Volleyball Player of the Year. The 5-11 Leibl was a four-sport HS standout at Ocean View in Huntington Beach (VB, BB, SB & TF) and made the VB Mag Top 50 player list before going to ASU. After three Olympics, she played on the beach and was the 2004 AVP Rookie of the Year. She was inducted into the Sun Devil Athletics HOF in 1996, and is currently coaching at the Wave Volleyball Club in Del Mar.