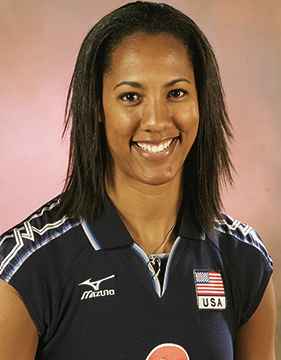 Tayyiba was an All-CIF player at Laguna Hills HS and won the CIF title her senior year and was State MVP. She was also a standout in track & field, winning the State Title in the high jump. Then the 6-7 hitter-blocker went to Long Beach State where she was part of two Volley Fours teams losing an unbeaten season in the 2001 NCAA finals.

She is a rare 3-time USA Olympian and the tallest in USA history–2004 Athens, 2008 Beijing (silver medal), and 2012 London (silver medal—becoming a rarer two-time women’s Olympic volleyball medalist). She made the 2012 team after leaving in 2009 to have a baby. She was the ‘best scorer’ in the 2005 NORCECA Championships and ‘best server’ at the 2007 Pan-American Games where she won a bronze medal. She won 3 FIVB World Cup Finals (2003, 07, 11). She was a 3-time Big West All-Academic selection. She was inducted into the Long Beach State Athletic Hall of Fame in 2008. She left beach coaching after last season at the University of Arizona to move to high school coaching in Laguna Hills.