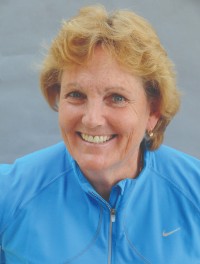 Terry had a successful volleyball career as a top player, head and assistant coach and college administrator. She played as a setter-hitter for the USA National team throughout the 1970s. She was a seven-time USVBA first team All-American, two-time second team All-American and was the National Player of the Year in 1971. The 6-footer played on the 1970 USA World Championship team as well as the 1971 and 1975 Pan American Games squads.

At UCLA, she had an 89-12 playing record, which included a pair of national titles in 1974 and 1975 and a national runner-up finish in 1976. Named to the UCLA Athletics Hall of Fame in 1992, she was also honored as one of the 25 greatest players in Bruin history. Her playing accomplishments were recognized by selection to the USA Volleyball 75th Anniversary Women’s ‘All-Era’ Team (1949-77) and her honor as an ‘All- Time Great Female Player’ by the USAV in 1983. She was a Bruin assistant coach to SCIVBHOF member Andy Banachowski for many years and head coach at Cal State Bakersfield, Texas A & M, and U Mass-Boston, winning over 400 college matches. She also did athletic administration around coaching. Condon was inducted into the AVCA Hall of Fame in 2015.