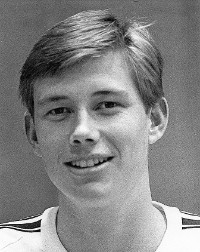 Troy played as the setter-outside hitter in Pepperdine’s 6-2 two hitter system and helped lead the Waves to the 1985 and 1986 NCAA titles, after being runner-up to UCLA in 1983 He earned multi-time All-American honors after starting his volleyball career at Los Altos HS in Hacienda Heights. He then went to the USA National Team and won a 1988 Seoul Olympic Games Gold Medal as an outside hitter after taking a silver medal at the 1986 Goodwill Games. He also had a top international playing career before retiring.

He became a club girls’ head coach and also the head coach for Pepperdine women’s team while coaching the beach game. While earning a Master’s degree he helped assist the BYU men to two NCAA titles. The 6-4 Tanner was the beach coach for Kerri Walsh and Misty May-Treanor when they compiled a 76-1 record and won the 2008 Beijing Olympic gold medal. He is the owner and founder of TStreet Club volleyball and specializes in elite beach coaching. He is a member of the Pepperdine Athletics Hall of Fame.