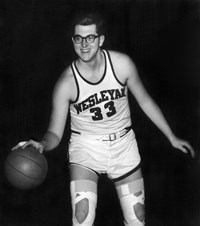 Wink started playing AAU volleyball in New York around a Hall of Fame career (inducted 2009) attending Wesleyan University in Connecticut on a basketball scholarship. The team captain set a school record with 44 points, while averaging 19.6 ppg for his career. He also lettered two years in golf before turning to a volleyball. He moved to Santa Monica in 1966 and was selected for the USA National Team as a 6-7 middle blocker. He won a gold medal at the 1967 Pan American Games and competed for the USA at the 1968 Mexico City Olympic Games.

He played in the 1969 World Cup. In 1971 Davenport captained Santa Monica to the USVBA National Championship, winning All-American honors, but because of bad knees he then retired and became an international referee as well as the top NCAA official for the men’s and women’s college matches. Davenport was the ‘up’ official for 11 NCAA men’s and 6 women’s championships. He officiated at the USA Cup, the World Junior Championships, the World Championships, the World Cup and the Olympics. He retired as an active referee in 1995 and helped coordinate officials at the 1996 Atlanta Olympic Games. In 1996 Davenport was selected for USA Volleyball’s Wilbur H. Peck Referee- Emeritus Award.